Current state-of-the-art capillary DNA sequencers can produce reads that can often exceed 1000 bases. However, these long dideoxy sequencing reads typically suffer from excessive peak broadening and poor resolution in the later part of the trace. This latter region is associated with low quality scores and high base call error rates.

CounterTrace II is compatible with the ABI BigDye™ v1.1 and v3.1 sequencing chemistries using the ABI3730 and ABI 3730xl DNA sequencing instruments for both the 36cm and 50cm capillary array lengths.

CounterTrace II allows the poorly resolved regions found at the end of the DNA sequencing trace to be accurately processed, thus providing the user with significantly longer and higher quality reads (Figure 2 & 3). 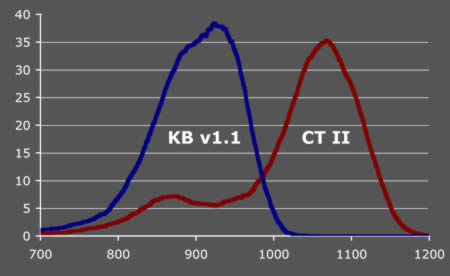 Figure 3. Distribution of number of Q20+ bases per trace before (KBv1.1) and after CounterTrace II processing (CT II). Results from 5427 traces generated on an ABI3730xl 50cm capillary array.

CounterTrace II offers increases in alignable KB Q20+ read lengths of up to 30% for individual DNA sequencing traces, with an average of 15–20% in high throughput production environments.

CounterTrace II processed traces run on the ABI3730 36cm capillaries provided DNA sequencing read lengths previously observed only with 50cm arrays. As these short-array runs take only half the time required for the longer arrays, the throughput can be effectively doubled by using CounterTrace II without the capital cost involved in purchasing additional instruments. In addition, Nucleics offers a modified 36 cm array run module that enables up to 28 runs per day (~51 min run time) to be performed without sacrifice of sequence read length.

CounterTrace II has been superseded by our PeakTrace basecallers. While CounterTrace II will continued to be made available to existing users we strongly recommend that they email us at {This email is obscured. Your must have javascript enabled to see it} to obtain information on upgrading to PeakTrace.

Trial our free onlineQualTrace 3 software on your own traces to see how real-time quality control monitoring can help improve DNA sequencing and reduce costs.