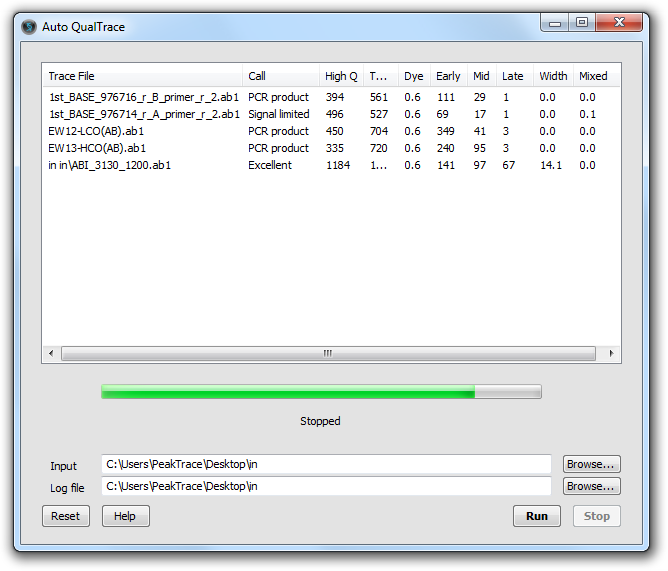 The QualTrace sequencing software can process either single .ab1 DNA trace files or folders of trace files. The software generates a log file report containing the QualTrace category type and code for each trace. In addition, the signal-to-noise ratio for the early, mid, and late regions of each trace are also recorded in the log file enabling the trace signal decay to be tracked. This ratio provides important information on ideal template concentration and BigDye mix, allowing effective optimization of the DNA sequencing process.

Use of QualTrace in DNA Sequencing Facilities

An example of the performance of QualTrace is illustrated in Table 1. A set of 11,745 ABI 3730xl traces of known sequence were collected using the ABI3XX base caller on a 36 cm array. The DNA traces were analyzed by QualTrace and sorted into their predicted categories. Each trace was base called using PHRED and the resulting sequences aligned to the known consensus sequence using CROSS_MATCH. The average number of aligned Q20+ phred bases for each of the nine QualTrace categories was calculated.

This analysis provided an accurate measurement of the predictive power of QualTrace II in identifying traces with production problems that limit alignable read length. The QualTrace DNA sequencing software was able to identify a significant problem in this data set of mixed signal resulting from multiple DNA templates (~17%). This problem was responsible for a major loss of DNA sequence read length with the average mixed trace providing only 322 phred Q20+ bases.

A second major issue identified by the QualTrace II DNA sequencing software was the large number (~7%) of failed traces. Continuous monitoring of this QualTrace failure type by capillary number allowed the identification of blocked capillaries that needed to be changed.

For more information about the QualTrace II or the Auto QualTrace II software please read the QualTrace DNA sequencing users manual, or email our support team at {This email is obscured. Your must have javascript enabled to see it} with any technical support questions you might have.

QualTrace II has been superseded by QualTrace III and is no longer sold or supported.

Obtain better DNA sequencing using the PeakTrace Basecaller.
Try PeakTrace for FREE on your own traces.

We have added a guide on troubleshooting automated DNA sequencing problems.