The N Base Trim option allows users to trim the 3′ or 5′ end of a trace based on the number of N base calls in a selected window size.

Figure 1. A region of a trace containing multiple N bases. The sliding window of 20 bases is coloured.

Figure 2. N Base Trimming with 7 N’s in a sliding window of 20 selected.

The N base trimming option is compatible with the set ABI limits option, which will perform a soft or “virtual” trim of low quality end regions instead of a hard trim. Combined with the N Base Threshold option users can select the minimum Q value will determine an N base being called allowing full control over the trimming.

If you have untrimmed traces that have already been processed through PeakTrace and you would like to trim them without being charged more units, you can perform post-process trimming by selecting abi/kb as the basecaller and choosing the appropriate trimming method. Remember to turn off the clean baseline, extra baseline and extra normalization options or else you will be charged for trimming the traces.

The q count trim option allows end trimming of the low quality regions of the basecall using a count of q score below a set threshold using a window of variable size. This trim option is a combination of 3 parameters; a quality score threshold, the number of bases below this threshold, and the size of the sliding window used over which the count is performed.

The basecalls are scanned from both ends using a sliding window starting of the selected size. The trace is trimmed when fewer than the selected number of bases have a quality score below the chosen value in the window. For example if the Q value is set to 20, the bases set to 4, and the window size set to 20, the trace would be trimmed from the 5′ and 3′ ends when a window of 20 bases contains fewer than 4 bases with a Q score below 20.

Below are some examples of the q count trimming option.

Figure 1. An example of an untrimmed trace.

From Figure 1 & 2 we can see a region with mid range Q scores starting from base 706. Once Q Count Trimming was applied it trimmed the trace at this region as it contained more than 10 bases with a quality value of 35 or less in a window of 20 bases.

The q average trimming option is compatible with the set abi limits option, which will perform a soft or “virtual” trim of low quality end regions which shows the trimmed bases as grey when viewed in ABI’s Trace Viewer software.

If you have untrimmed traces that have already been processed through PeakTrace and you would like to trim them without being charged more units, you can perform post-process trimming by selecting abi/kb as the basecaller and choosing the appropriate trimming method. Remember to turn off the clean baseline, extra baseline and extra normalization options or you may be charged for trimming the traces.

The trim improved traces only option allows the user to decide if they want PeakTrace trimming options to act upon on all traces or just those traces basecalled by PeakTrace. This setting is useful if you want traces that were skipped short or below the good improvement threshold to be output in their original condition without trimming.

Figure 1. An example of a trace that was skipped short, with Trim improved traces only off. The low quality bases after base 304 have been removed.

The trimming functions of PeakTrace are useful in removing unwanted poor quality data from the of a trace. The defaults settings of PeakTrace assume that you wish to apply the same trim settings to traces improved by PeakTrace and those not (i.e. where the original KB basecall is output). The use of trim improve traces only allows the PeakTrace improves traces to be trimmed leaving the KB basecalled traces untrimmed.

It is not advised to use the trim improved traces only setting under most circumstances.

The Clear Range Trim option allows you to select the number of bases you want to trim from the start and end of a trace.

Through the use of 2 value boxes users can choose how many bases they want to trim from the 5′ end of a trace and how long the resulting sequence will be. This trimming option is often not the best method to trim poor quality regions of a trace, as it has the potential to trim regions of high quality data. Other methods such as Q average trimming remove only areas of poor quality data.

Figure 1 and Figure 3 show the start and mid regions of a trace. Figure 2 shows trimming of the first 30 bases after a clear range of 30 and 230 was selected. Figure 4 shows the same trace at the ending region after  a clear range of 30 and 230. Notice that because the first 30 bases have been removed a frame shift has occurred, what was once base 260 is now base 230.

Figure 1. The starting region of a trace. 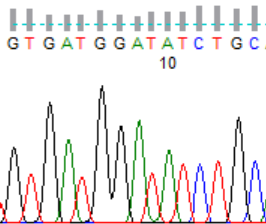 Figure 3. The mid region of a trace.

If you have untrimmed traces that have already been processed through PeakTrace and you would like to trim them without being charged, you can perform post-process trimming by selecting abi/kb as the basecaller and choosing the appropriate trimming method. Remember to turn off the clean baseline, extra baseline and extra normalization options or else you will be charged.

The clear range trimming option is compatible with the set ABI limits, which will perform a soft or “virtual” trim when viewed in ABI’s sequencing analysis or sequence scanner.

The PeakTrace 6 fuse trace at base and fuse basecall at base options allow the combination of 2 basecallers in one basecall to gain the best from both.

Fuse Trace at Base

The fuse trace at base option allows you to enter an approximate position that the original KB trace will be fused with the PeakTrace output. This fuses both the basecall sequence and the processed peaks. The position is only an approximation as PeakTrace will only fuse traces where it finds enough similarities between the basecalls for a smooth transition. We recommend using the lowest value (1).

The best way to see how fuse trace at base works is from the following examples.

Figure 1. An example of an original KB processed trace.

Figure 2. The same trace processed through PeakTrace with no fuse trace selected.

Figure 3. The same trace processed through PeakTrace with fuse trace selected at position 1.

An added feature of the fuse trace at base option is to use KB’s better processing of dye blobs early in a trace with extra baseline. If significant dye blobs are present, setting the fuse trace at base position past the region affected can help remove dye blob problems in code. The In Depth article on extra baseline explains how best to use these two settings together.

Fuse Basecall at Base

Figure 5. The same sample processed through PeakTrace without basecall fuse at base.

Figure 6. The same trace processed through PeakTrace with fuse basecall at base set to to 30.

Figure 5 shows a trace processed with PeakTrace and no fuse settings. Figure 6 shows the same trace again processed with PeakTrace, however the basecall sequence and associated quality values have been carried over from the original trace in Figure 4. Due to the inherent difficulties of aligning a PeakTrace processed trace with a basecall sequence from KB, slight peak translocations can occur where the KB basecall may not align to the peaks from PeakTrace.

Update. The basecalling and trace processing have improved significantly in PeakTrace 6.90 and higher and so it is recommended that fuse trace at base or fuse basecall at base are no longer used.

The skip short traces option is a useful option in PeakTrace to skip over the reads form short DNA fragments. As the improvement in basecall quality for shorter traces can be minimal, you may wish to skip over them and save units. Using this setting can avoid manually sorting traces before processed through PeakTrace. 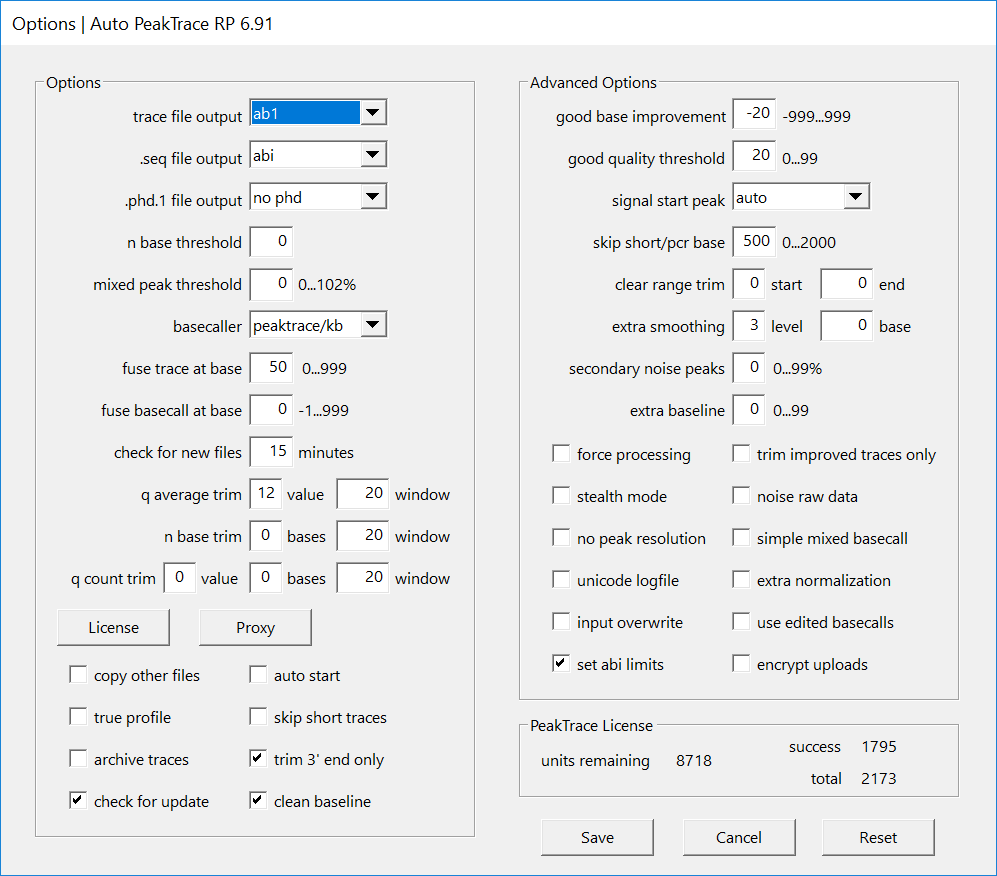 If a value over 500 is entered in the skip short/pcr base field then the skip short traces function will be turned off, enabling the PCR trim function. Lowering the value below 500 will cause fewer traces to be considered short traces and hence more files will be processed by PeakTrace. 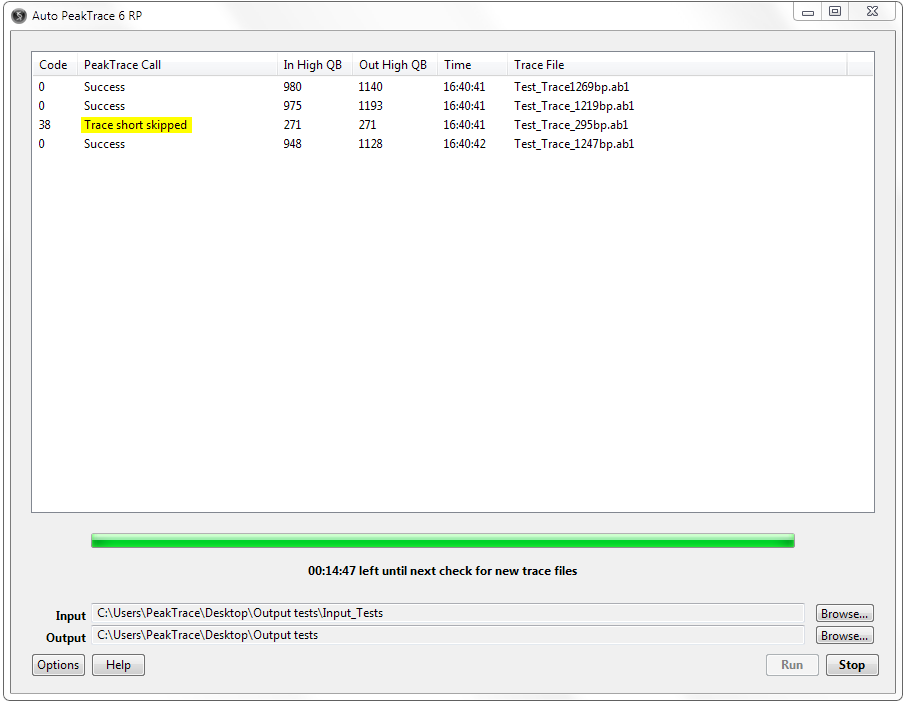 It is possible to improve the appearance of the short skipped traces by selecting the peaktrace/kb basecaller option and using either clean baseline, extra baseline or extra normalization.

Any trimming options that are activated in PeakTrace will still be applied to the Skip Short trace, if you do not wish trimming to be applied to skipped traces then select the Trim Improved Traces Only option.

An unfortunate side effect of a basecallers ability to process peaks is that the processing can suppress or raise the secondary peak signal and with it alter the recognition of polymorphic sites.

The PeakTrace no peak resolution setting outputs peaks that have been minimally processed and which are as close to the true raw data as possible while being usable. This setting allows users can spot true relative peak differences or production problems.

The use of the no peak resolution can be best seen by looking at the following polymorphic region.

Figure 1. An example of raw data from a polymorphic site. Note the secondary (blue) C peak under the primary 4 T peaks (red) in the middle of the window. The C peak is 75% of the height of the second T peak.

Figure 2. The same trace as Figure 1 processed using the KB Basecaller. Note the primary and secondary peak at position 698. The C peak is 95% of the height of the second T peak.

Figure 3. The same trace and Figure 1 processed using standard PeakTrace settings. Note the primary and secondary peak at position 698. The C peak is 105% of the height of the second T peak.

Figure 4. The same trace processed using PeakTrace with No Peak Resolution. Note the primary and secondary peak at position 698. The C peak is 75% of the height of the second T peak. This matches the relatively signal heights seen in the raw data.

From Figure 2 and 3 it is clear both KB and PeakTrace process the raw data seen in Figure 1 differently, but it is also clear that neither of them are identical to the true raw peak signal seen in Figure 1. Figure 4 is the most accurate representation of what we are seeing in the raw data channel through the use of the no peak resolution option. This is important when further downstream analysis of polymorphic sites and peaks relies on the accurate signal intensity.

The no peak resolution version of the .ab1 file can be output at the same time as the standard PeakTrace version by selecting the ab1+np trace file output option. This avoids the need to process a .ab1 file twice to get both versions.

If you plan to use the advanced setting simple mixed basecall it is strongly advised to use no peak resolution setting.

In most scenarios the usage of PeakTrace will lead to an increasing the number of high quality bases in the basecall. There are however a few factors that can  limit PeakTrace’s ability to improve a .ab1 trace file, such as:

If  PeakTrace encounters a trace it can’t improve there are two ways to deal with the original file. The first involves just copying the .ab1 file to the output folder with no attempts at improving the file, or the appearance of the trace can be improved through KB fallback processing with the Clean Baseline, Extra Baseline and Extra Normalization options.

If PeakTrace can’t improve the basecall sequence but you want to improve the original input file select PeakTrace/KB basecaller.

Be aware that improving a file through the use of the Clean Baseline, Extra Baseline or Extra Normalization options will use a processing unit even if PeakTrace hasn’t basecalled the file.