We have released PeakTrace 6.30 for x86_64 Redhat/CentOS 6.7. This update incorporates a number of major changes that improve trace processing and output quality. The full list of changes

We will be releasing Auto PeakTrace 6.30 early next week as soon as the final testing is complete.

One of the new features introduced in PeakTrace 6.10 is the “picket fence” basecalling option. This option is normal PeakTrace basecalling with an extreme peak normalisation applied that makes all the trace peaks approximately the same height. This output can be very useful if you wish to post-process the trace file to detect and quantify polymorphic regions.

Figure 1 shows an example KB basecalled trace containing a polymorphic region resulting in mixed base calls. The primary peaks vary by more than 4-fold in height making the quantification of the relative heights of the mixed positions more complex.

Figure 3 shows the same trace basecalled using the “Picket Fence” basecalling option. The peaks display an extreme normalisation making it easier to quantify the secondary peak heights at each of the polymorphic positions.

We have released PeakTrace 6.20 for x86_64 Redhat/CentOS 6.7. This update incorporates a number of new switch that make it easier to upgrade from earlier PeakTrace 5. The major new feature is the PCR trim setting can be adjusted beyond base 500. This can aid in processing sequencing traces from larger PCR fragments. The full list of changes include: 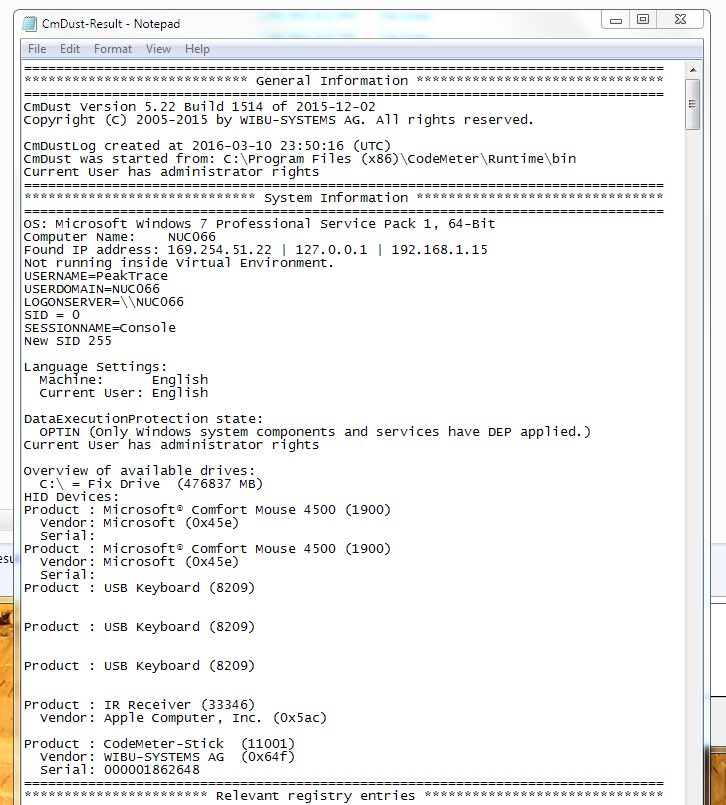 If you are having problems getting the Auto PeakTrace or the Linux PeakTrace software working, you may be requested to generate a cmDust file. This file is created by the cmDust utility, which is installed as part of the CodeMeter Runtime. The cmDust file provides us with a diagnostic of your system and can help us identify the cause of the problem(s) you are experiencing.

If requested by Nucleics (or your local supplier) to generate and send a cmDust file, these are the steps for both Windows and Linux.

We have updated the layout of our software downloads page. Previous we all software updates were on the same page for the different versions of PeakTrace, but we found that many customers were confused as to which version they should download. To try and make this process less confusing we have split the downloads pages into an PeakTrace RP Downloads page and a PeakTrace:Box Downloads page.

These pages are also direct accessible from the Support menu.

The passwords to access these pages has changed so if you wish to download an update just send email us at  {This email is obscured. Your must have javascript enabled to see it}.

We have released PeakTrace 6.12 for x86_64 Redhat/CentOS 6. This fixes a few minor bugs, but it does include one important improvement – bubble spike correction. Bubble spikes are sharp spikes in the raw data channel caused by small air bubbles in the polymer. When these small gas bubble travel past the sequencer detection zone they refract the laser light onto the CCD detector. This causes a large, but very sharp spike in the raw channel. While these bubble spikes are a production issue that should be fixed by the operator, we are able to correct the problem in software, although not always in every case. This change has been incorporated into PeakTrace 6.12. The change list for this release is:

PeakTrace 6.12 can be downloaded from the PeakTrace:Box Downloads page. If you do not have the password to access the downloads page please contact us @ {This email is obscured. Your must have javascript enabled to see it}.

We have released PeakTrace 6.11 for x86_64 Redhat/CentOS 6. This update has many improvements and enhancements over previous versions and is a recommend update for all users of the linux version of PeakTrace. The full list of changes

PeakTrace 6.11 can be obtained from the Nucleics Downloads page. If you need the password to access the downloads page please contact us @ {This email is obscured. Your must have javascript enabled to see it}.

A question we get asked occasionally is what PeakTrace Basecaller settings are used with the free PeakTrace Online version? Because the online version is intended to support the widest range of sequencer run conditions, while showing (some) of the power of PeakTrace, it uses a set of conditions rather different to default values. The free version of PeakTrace uses the linux command line software with the following the options settings:

These settings are not suitable if you are trying to detect polymorphic sites (i.e. mixed peaks). For this you need to use a paid version of PeakTrace and a mixed peak threshold above the default 0.

The PeakTrace default values are usually the best place to start, but you should always trial the various options to find what works best for your needs.  If you would like further advice on the best settings to use with your sequencing data, please don’t hesitate to contact us @ {This email is obscured. Your must have javascript enabled to see it}.

We have released Auto PeakTrace 6.01 and PeakTrace 6.01 for Linux. This is a minor update that fixes a small issue with the clear range trim when combined with other trim settings. The changes are:

These updates are available on the Nucleics Downloads page. If you have not upgraded to Auto Peaktrace 6 you will need to follow the instructions on how to upgrade to Auto PeakTrace 6.

A major update to PeakTrace has been released – PeakTrace 6. This version has a large number of improvements and new features and it is highly recommended that all users update to this version (it is a free upgrade). Both the Windows (Auto PeakTrace) and Linux versions (PeakTrace) are now available from the Nucleics Downloads page. You will need to update your system as described in the How to upgrade to Auto PeakTrace 6.