While it is immediately obvious that the standard PeakTrace basecalling (Figure 2) is far superior to that provided by KB (Figure 1), some users are concerned that the default PeakTrace basecalled traces look “too good” to be real. While we think this is an unnecessary concern (after all nobody complains that their dinner tastes “too good” and they wished that it tasted worse), we do understand that some of our customers want to provide their end users with the superior basecalling of PeakTrace with a trace that looks very similar to what KB generates. The secondary noise peaks setting provides a simple way of degrading the trace output so that PeakTrace basecalled traces look like KB basecalled traces, while still providing the same base and quality score improvements that PeakTrace offers.

It is advisable to not use a secondary noise peaks value over 10. Using a large value will create a trace with a very poor appearance and end users may mistake the secondary peaks as true mixed peaks. This is one setting to use with caution.

One of the new features introduced in PeakTrace 6.40 was Set ABI Limits. This option changes the PeakTrace trimming functions from hard trims (i.e. actual removal of the low quality regions) to the same soft (virtual) trimming that is performed by the KB Basecaller’s Post-Processor module. If trace trimming is selected within Sequencing Analysis, then KB will remove the low quality regions from the trace by setting the ABI Limits values in the trace file to indicate the high quality region. When the trace or basecall is viewed in Sequencing Analysis or Sequence Scanner, the trimmed basecalls are still present, but the peaks and bases are now grey (Figure 1).

PeakTrace is now also able to set the ABI Limits values by using the Advanced Option Set ABI Limits with trace trimming. Instead of the hard removal of the low quality regions, these regions are “greyed out” when viewed in Sequence Scanner or Sequencing Analysis – just like KB (Figures 2 & 3).

One of the limitations with using Set ABI Limits is that none of the non-ABI trace viewers are able to use the ABI limits region. For example, Figure 4 shows the same trace as shown in Figure 2, but in FinchTV. The low quality region after base 1390 is not shown greyed out or trimmed by FinchTV.

Set ABI Limits is a very useful addition for those users of PeakTrace who wish to replicate the results provided by the KB Basecaller as close as possible. It provides the same “greyed out” trimming of the low quality regions that Sequencing Analysis Post-Processing provides.

Users of this setting are encouraged to upgrade to PeakTrace 6.42 or greater as this release has introduced a workaround for a bug in Sequencing Analysis that stops the display of the 3’ trimmed region when the 5’ end is untrimmed.

We have released Auto PeakTrace RP 6.42. This release is an optional minor release that improves the basecalling of traces with large spikes as well as the use abi limit option. The full list of changes in this release are

Auto PeakTrace RP 6.42 can be downloaded from our PeakTrace RP Downloads page for both Mac OS X (>10.8) and Windows (XP, Windows 7, Windows 8 and Windows 10). It will bye available via the PeakTrace RP automatic application update function shortly. If you do not have the password to access the downloads page please contact us @ {This email is obscured. Your must have javascript enabled to see it} or contact your local supplier.

We are happy to announce the release, in collaboration with Technelysium, of PeakTrace for Chromas. Chromas 2.60 integrates the PeakTrace Basecaller into the Chromas trace viewer (enhance button). This release of Chromas comes with 20 free PeakTrace units allowing the power of PeakTrace to be explored during trace viewing on a trace by trace basis. Additional unit can be purchased via our secure PeakTrace Online Store.

Chromas 2.60 with PeakTrace can be downloaded for free from the Technelysium website. 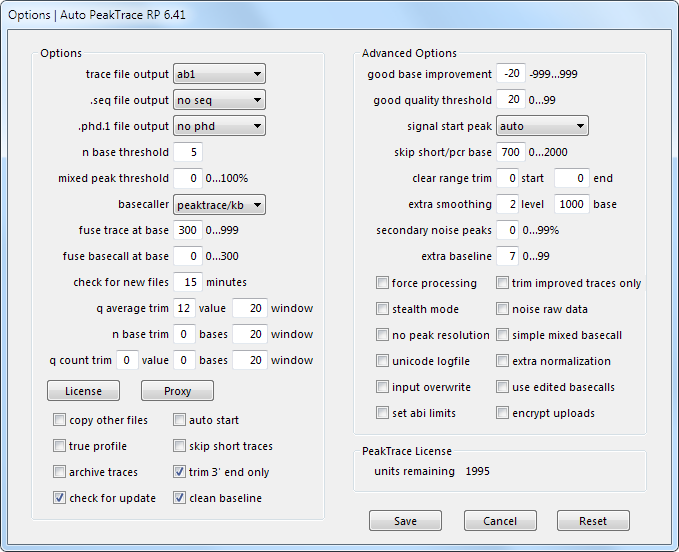 With the release of PeakTrace 6.40 we have updated the setting for the free version of PeakTrace (PeakTrace Online) to make optimal use of the improvements incorporated into this version. The new settings are now

These settings are not suitable if you are trying to detect polymorphic sites (i.e. mixed peaks). For this you need to use a mixed peak threshold above the default 0.

The PeakTrace default values are usually the best place to start, but you should always trial the various options to find what works best for your needs.  If you would like further advice on the best settings to use with your sequencing data, please don’t hesitate to contact us  @ {This email is obscured. Your must have javascript enabled to see it}. 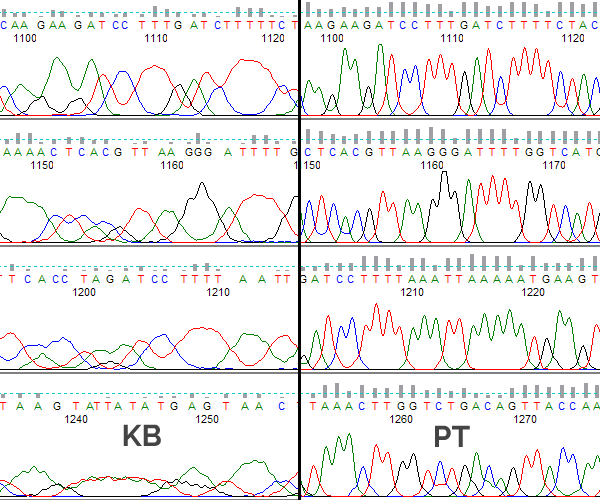 We have released Auto PeakTrace RP 6.41. This is a minor update, but with a number of important changes to the internal modules that improve the performance and basecalling quality. The full list of changes include.

Auto PeakTrace RP 6.41 can be downloaded from our PeakTrace RP Downloads page for both Windows (XP, Windows 7, Windows 8 and Windows 10) and MacOS X (10.6+). It is also available via the in-app update function. If you do not have the password to access the downloads page please contact us @ {This email is obscured. Your must have javascript enabled to see it} or contact your local supplier. 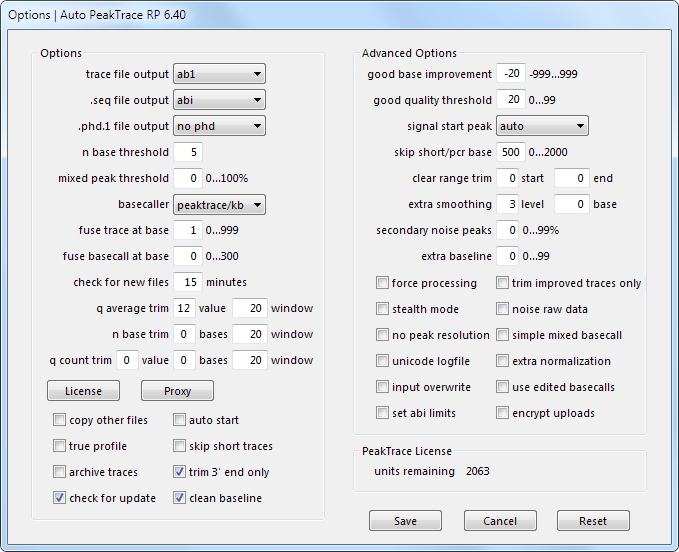 We have released Auto PeakTrace RP 6.40. The is a major update that significant improves trace quality output and appearance. We have changed the Options menu to make Auto PeakTrace RP easier to use and updated the default settings to make best use of the new settings. In addition, we have improved the help manual and added a new feature which allows the ABI Limits values to be set by PeakTrace instead of hard trimming. The full list of changes include.

Auto PeakTrace 6.40 can be downloaded from the PeakTrace RP Downloads page for both Windows (XP, Windows 7, Windows 8 and Windows 10) and MacOS X (10.6+). It is available via the in-app update function. If you do not have the password to access the downloads page please contact us @ {This email is obscured. Your must have javascript enabled to see it}.

One of the new features of PeakTrace 6.30 is the extra baseline setting. This setting further improves the appearance of trace files by removing non-base peaks such as dye-blobs and baseline noise. It does not affect the base or quality call of the output file. This setting is best illustrated with an example trace.

Figure 1 shows an example trace that has been basecalled with the KB Basecaller™. The trace contains significant dye-blobs and noise peaks under the primary peaks. The appearance of the trace is not ideal.

Figure 2 shows the same trace and region basecalled with PeakTrace 6.30 using the clean baseline setting. Much of the noise peaks have been removed, but the dye-blob region is still poor in appearance.

Figure 3 shows the same trace and regions as Figures 1 & 2, but using PeakTrace 6.30 and the extra baseline setting. The dyeblob region and noise peak signal has been removed from the trace. Note the DNA sequence and quality scores are identical in all three traces.

The extra baseline setting is a very powerful tool for improving the appearance of the trace files, but like all powerful tools it can prove problematic if abused. The three major issues to watch out for are: 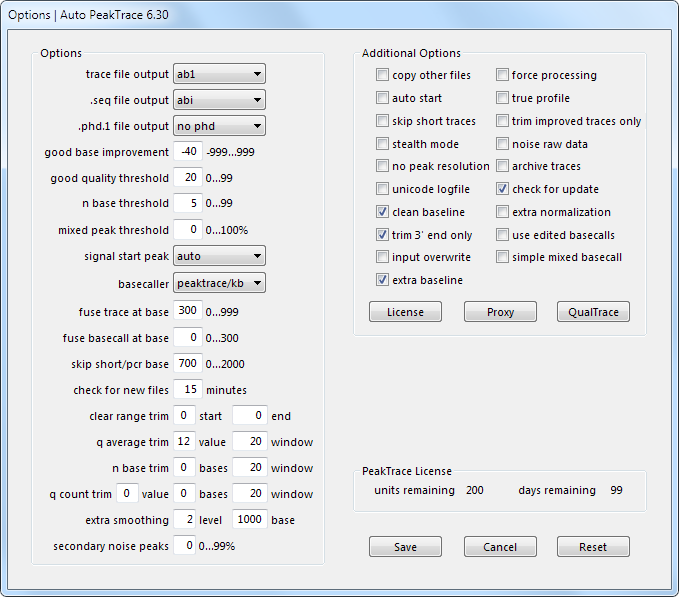 With the release of Auto PeakTrace RP 6.30 we have updated the basecalling parameters used by the free version of PeakTrace to take advantage of the new options available within PeakTrace 6.30. The PeakTrace command line options settings now used are:

These settings are designed to optimise the read length and appearance of the trace, but not the detection of polymorphic sites. If you wish to detect polymorphic sites (mixed bases) raise the mixed peak threshold above 25%.

If you would like further advice on the best PeakTrace settings to use with your sequencing data, please don’t hesitate to contact us  @ {This email is obscured. Your must have javascript enabled to see it}. 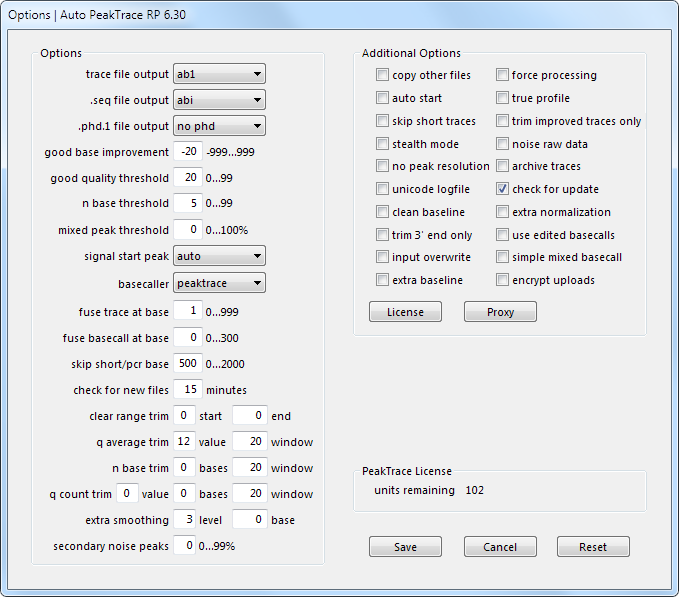 We have released Auto PeakTrace RP 6.30. This is a major update with two new features – extra baseline and secondary noise peaks. These two setting can improve the appearance of the traces and help to better match the appearance of PeakTrace basecalled traces to that obtained from the KB Basecaller. These new features are explained in the user help manual, but we will also be writing in depth articles on each of these new features. The full list of changes include.

This PeakTrace RP release can be downloaded as per usual from the PeakTrace RP Downloads page for both MacOS X (10.6+) and Windows (XP, Windows 7, Windows 8 and Windows 10). It will be also be available via the in-app update function in a few days. If you do not have the password to access the downloads page please contact us @ {This email is obscured. Your must have javascript enabled to see it}.